What are biological response modifiers? 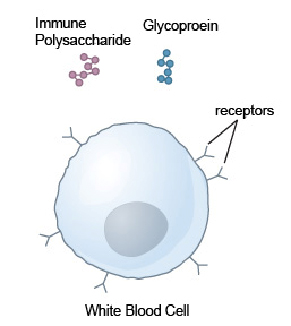 There are receptors coating the surface of every cell with a nucleus that help to facilitate communication between cells. Biological response modifiers are large sugar molecules (immune polysaccharides), or sugar and protein molecules (glycoproteins) that interact with receptors on the surface of immune system cells. Essentially, these biological response modifiers are used to stimulate the immune system.

Why recommend administration of biological response modifiers to my pet?

Glycoproteins and immune polysaccharides increase the ability of white blood cells (macrophages) to destroy infectious organisms and may possess bone marrow stimulating activity. They may also help promote the destruction of solid tumors such as fibrosarcomas and have proven very useful in the treatment of immune deficiency disorders of cats such as feline leukemia virus (FeLV) infection and feline immunodeficiency (FIV) infection. The most commonly prescribed biological response modifiers are acemannan and mannose.

How is acemannan used?

Acemannan is derived from the Aloe vera plant, and is an immune polysaccharide. It is unusual among herbal extracts in that it has been well researched and consistently found to improve immune function in a variety of disorders. One way it boosts the immune system is when given as an adjuvant (a substance added to a vaccine to improve the immune response so that less vaccine is needed). Adverse vaccine reactions are often 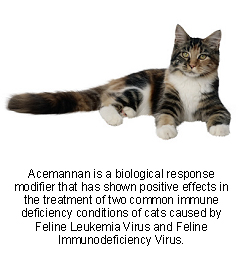 "...macrophages, are the first cells to confront and attack a foreign invader in the body."

Part of the improved response in fighting these infections comes from acemannan's specific stimulation of macrophages, which are the first cells to confront and attack a foreign invader in the body. In one study of cats with advanced FIV, acemannan treatment resulted in a reversal of the usual swings in white blood cell counts. The overall survival rate was 75%, with some of those cats surviving over one year at the end of the study. Similar positive changes were seen in a much shorter-term study of the effects of acemannan on FeLV. Much of the research has been done with acemannan in injectable form, but the FIV study demonstrated no significant difference in response between weekly injections and daily oral administration methods.

"Evidence also supports the use of acemannan in the treatment of cancer."

Evidence also supports the use of acemannan in the treatment of cancer. In a study of its use in fibrosarcoma, 50% of animals treated with weekly acemannan injections demonstrated tumor shrinkage and necrosis. Following surgical resection and radiation therapy, animals survived an average of one year, with some patients surviving over two years.

In another study, acemannan was injected directly into a variety of tumors. Twenty-five percent showed marked improvement, with 50% percent of treated animals overall benefiting from acemannan treatment. Improvement was characterized by tumor shrinkage and necrosis, due in part to acemannan's effect of stimulating tumor necrosis factor secretion in the body.

How is mannose used?

Compared with acemannan, very little research has been conducted on the glycoprotein mannose. Most research has been conducted in the poultry industry, where mannose appears to have a probiotic effect. A probiotic is defined as a live microbial food supplement which beneficially affects the host animal by improving its intestinal microbial balance. In other words, mannose appears to promote the growth of intestinal microflora that are more commensal or beneficial to the host, which decreases the levels of pathogenic or disease-causing species. The immediate benefit is a reduced level of potentially disease-causing bacteria in the food supply. Mannose also improved health status and growth rates.

How much experience is there with the use of biological response modifiers in pets?

These molecules have been studied for about 20 years in dogs and cats. While not the cure-all originally hoped for, many pets show improvement when treated with them.

"Glycoproteins and immune polysaccharides vary in their effectiveness depending upon the severity of the case."

Glycoproteins and immune polysaccharides vary in their effectiveness depending upon the severity of the case. In general, holistic doctors are pleased with clinical results. 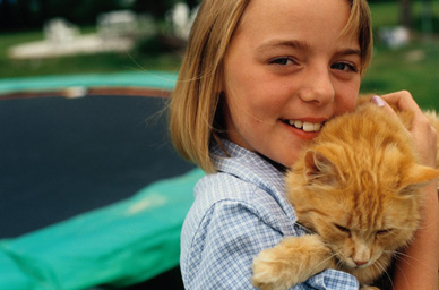 What species of animals are being treated regularly with biological response modifiers?

Dogs and cats are the pets mainly treated. These supplements appear safe to use in many species, including birds.

How safe are biological response modifiers?

The biological response modifiers discussed above are very safe. Adverse effects are rare and usually occur when they are injected or when doses greatly exceed levels that would be expected in normal diets. For pets being treated with the most commonly used modifiers, side effects are not expected.

Where do I get biological response modifiers and do I need a prescription?

Pet owners are cautioned against buying supplements without knowledge of the manufacturer, as supplements are not highly regulated and some supplements may not contain the labelled amount of ingredients. Your veterinarian may have preferred brands of supplements that he or she will recommend. A prescription is not needed for these supplements, except injectable acemannan, which is considered an experimental drug in Canada and made available only to licensed veterinarians.

© Copyright 2009 Lifelearn Inc. Used and/or modified with permission under license.